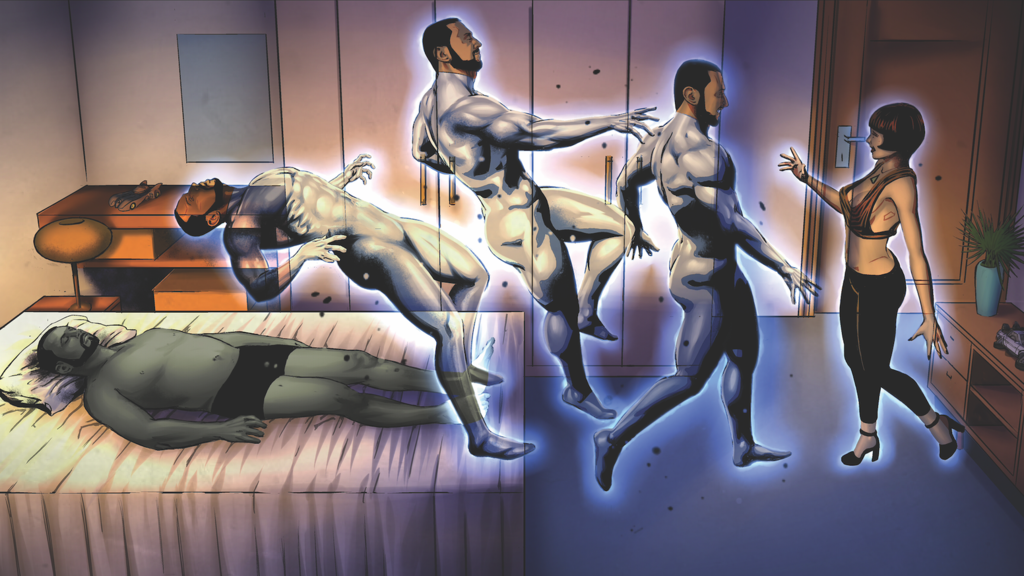 A kick-you-in-the-teeth paranoid thriller set in the world of astral projection from the creator of Action Lab's ABERRANT and BANJAX.

Latest Updates from Our Project:

Just a heads up and a HELL YEAH here to let you know that my latest and greatest comic book fit - the Wuxia Kung Fu epic FA SHENG: ORIGINS from Immortal Studios - is now LIVE on Kickstarter and we've already been chosen as a PROJECT WE LOVE! Head on over HERE and check out all of the fun/high jinx!

Part historical drama, part philosophical enlightenment play, three parts ass-kicking kung fu trip, this is quite simply one of the best things I've ever written and I know you're going to love it! Head on over to the campaign page and grab your copy RIGHT NOW: https://www.kickstarter.com/projects/theadept2/fa-sheng-origins-1-by-rylend-grant-and-dexter-wee?ref=4wwh5m

Fa Sheng is a death-cheating, mind-bending Shaolin Master… but he carved a long bloody road to get there. Fa Sheng’s story begins in the latter days of the 19th century when the propaganda and carnage of China's Boxer Uprising force him to reevaluate his purpose in life, to dedicate himself to helping those in need. It isn’t easy. Between Fa Sheng and his goal of enlightenment stand ruthless adversaries, backstabbing power grabbers and cowardly charlatans… any of whom would gladly dispose of anyone in their way.

"You’re not born into enlightenment. It’s earned. It’s fought for, tooth and nail, over time. It is too often a byproduct of tragedy and strife. In FA SHENG: ORIGINS, we watch as our titular martial hero is forced through the meat grinder of the Boxer Uprising, of China’s Warlord Era. He witnesses unspeakable evil and is dealt horrible defeat--but he rises, in the end, from the ashes of the carnage, a changed man, a better man, an enlightened man with a mission, deputized by the powers that be in the fight against all that Dharmically ails us." -- Fa Sheng: Origins writer, Rylend Grant

Just a reminder that my my latest and greatest comic book fit - the Wuxia Kung Fu epic FA SHENG: ORIGINS from Immortal Studios - launches right here on Kickstarter, TOMORROW - TUESDAY, MAY 3rd! Make sure you SIGN UP TO BE NOTIFIED when it goes live! You can do that right HERE!

Comic Book Resources just debuted our gorgeous new Gene Ha Cover. It's quite the kick in the jewels:

We also have covers from Megan Huand, Yishan Li, Dan Kramer AND MORE!

YOU ARE NOT GOING TO WANT TO MISS THIS ONE!

I just wanted to remind you that my latest and greatest comic book fit - the Wuxia Kung Fu epic FA SHENG: ORIGINS from Immortal Studios - launches right here on Kickstarter, TUESDAY, MAY 3rd! Make sure you SIGN UP TO BE NOTIFIED when it goes live! You can do that right HERE!

Fa Sheng: Origins is a kick ass/take names/howl at the moon magical martial warrior epic in the vein of Crouching Tiger, Hidden Dragon, meticulously set against the historical backdrop of China’s bloody and turbulent Boxer Uprising and the Warlord era that followed. It’ll challenge you emotionally and philosophically in the best way. In the end, you’ll be begging to see what comes next.

MAKE SURE YOU'RE SIGNED UP TO BE NOTIFIED WHEN IT GOES LIVE: https://www.kickstarter.com/projects/theadept2/1281297143?ref=aqoppa

Screen Rant just announced my latest and greatest comic endeavor - FA SHENG: ORIGINS - a BAD ASS historical Kung Fu extravaganza from the fine folks at Immortal Studios! The first MASSIVE double issue will be released on Kickstarter in just a few weeks. You can sign up to be notified when the campain goes live HERE!

Fa Sheng: Origins reveals the humble beginnings of the great Shaolin Master. The series is created by Peter Shiao and written by Rylend Grant, a screenwriter, author, and Ringo Award-winning comic book creator who is also an ordained Soto Zen Buddhist monk. Fa Sheng: Origins is illustrated by Dexter Wee (Outlaw Territory, The Führer and the Tramp), colored by Omi Remalante, Jr., lettered by Deron Bennett, and edited by Brian Cunningham (Superman, The Flash, Wonder Woman). Readers of Immortal Studios’ The Adept know Fa Sheng as a death-cheating, mind-bending Shaolin Master… but he carved a long bloody road to get there. Fa Sheng’s story begins in the latter days of the 19th century, when the confusion and carnage of China's Boxer Uprising force him to reevaluate his purpose in life, to dedicate himself to helping those in need. It isn’t easy. Between Fa Sheng and his goal of empowering the masses stands ruthless adversaries, backstabbing power grabbers, and cowardly charlatans… any of whom would gladly dispose of anyone in their way.

For announcements, updates, and news on the Kickstarter campaign, visit the pre-launch page:

Read what Screen Rant has to say about Fa Sheng: Origins in their exclusive coverage of the comic series here: https://screenrant.com/immortal-studios-fa-sheng-origins-martial-arts-comic/


Meet me and the entire Immortal Studios team at WonderCon, April 1-3 in Anaheim, CA

Immortal Studios will reveal more about the Immortal Storyverse at WonderCon 2022, where we’ll host a panel on Saturday, April 2nd:

1:30-2:30 Immortal Studios: Birth of a Storyverse — Fans of wuxia, martial arts fantasy, and comics rejoice! This is your chance to get in on the ground floor of the Immortal "Storyverse" that is bringing together all the wide-ranging influences of this timeless Asian genre in an interconnected comic book universe for the first time. Join Peter Shiao (Founder and CEO), Hank Kanalz (Head of Publishing), Bernard Chang, Tasha Huo, Rylend Grant, and Jen Troy (the key talent behind TheAdept, Chronicles of the Immortal Swordsmen, and other tentpole titles), for an in-depth introduction that promises to awaken the hero in everyone through Wuxia. Don’t miss your opportunity to witness history! The panel will include special commemorative gifts exclusively for attendees! Room 213AB

Bernard Chang, Tasha Huo, Peter Shiao, and Rylend Grant will also be at our booth, SP #107 in the Small Press area, for signings, and Hank Kanalz will be conducting portfolio reviews, so stop by and say hello!

I just wanted to stick my head in here quickly and let you know about a project I just gleefully backed. My friend Jason Inman - cohost of the Geek History Lesson Podcast & cowriter of the Ringo Nominated JUPITER JET series - has just launched a kickstarter for Issues 1 & 2 of his latest and greatest, SUPER BEST FRIEND.

What if you livestreamed your best friend's secret identity to the entire world?

Mattie Moore loves superheroes. Unfortunately, one of his livestreams wrecked the life of his best friend, the superhero, Captain Terrific. Now, Mattie must enter the fantastic world of heroes and villains to repair his friendship. BUT WATCH OUT! A bitter arch enemy demands revenge!

In this 44 page second issue, Mattie is struggling to survive his attack as a cyclone of cybernetic clones, electric doppelgangers and Army tanks pursue him. It’s an adventure full of Silver Age Energy that examines the relationship between superheroes and their fandom. After this zany journey, Mattie will not only climb the ladder to his destiny — he’ll discover his SUPER BEST FRIEND.

If you missed out on Issue 1, don't worry! You can pick it up here. Jason is a great writer and an even better dude. This was a day 1 back for me and it should be for you also!

CHECK IT OUT HERE!